GREASEBALLS GONE AS NEW PUMPS GET TO WORK

Situated approximately halfway between two of America’s largest cities, Madisonville (population 4396) might not deal with the same mega volumes of wastewater that are treated in Dallas and Houston, but for its highly dedicated team, there is never any let up in their commitment to their city’s treatment plant.  24/7, always on call.  The people of Madisonville depend on them.

Tucked away from Interstate 45, these unsung heroes have been very proactive in ensuring that the city’s 450,000 gallons per day of wastewater it treats is done so with the utmost efficiency.

Most local restaurants in Madisonville now have their own grease traps, which are regularly inspected, but still, from these, plus other local businesses and residential properties, grease somehow finds its way through the eleven lift stations around the city, to the plant.

Following its flow through the plant’s screens, clarifiers and contact basin, final discharge goes into the town creek, which flows southwest to the City of Bedias, then out into the Trinity River.

Frustrated with the ever-increasing frequency of having to cope with grease and frequently de-rag the duty pumps, the plant decided that investment in tougher, more resilient equipment was required.

Through recommendation by Waco-based Smith Pump Company, a 24.5HP Landia Chopper Pump replaced one of the existing duty pumps. Invented by Landia in 1950, the product is hardly something new. However, Smith Pump Company knew that with the long-lasting hardened steel external cutting system, it would provide superior capability, as well as macerate the problematic rags.

Allen Castillo, who during his 8 years at Madisonville has worked his way up to become the WWTP’s new Director/Site Superintendent, said: “The old pumps just weren’t doing their job. They couldn’t cope. Almost every time we looked down into a tank, all we could see was grease. We’d regularly see grease-balls the size of softballs”.

De-ragging had become a tough, twice-weekly chore
He added: “We were trying everything that we could to keep the plant efficient. Having to keep dealing with the grease was disheartening, and on top of that, de-ragging had become a tough, twice-weekly chore – very labor intensive – costing us around 6-8 hours every week – for two of us – and of course the pumps would always block at the worst possible times.  They weren’t cutting anything up.”

Jamar Randel, who has loyally served the City of Madisonville for 16 years, continued:
“Every blockage meant that we’d have to unscrew the bottom part of the pumps because the propellers wouldn’t move, then pull, hard.  In this type of job, you expect to get your hands dirty, but when this becomes such a regular chore, you know something’s not right. The mess and splash-backs from the failing pumps was nasty.  But since we’ve had the Landia equipment, we no longer have to put up with that.  These pumps don’t block.”

Before flow reaches the drum screens at the beginning of the main process stages, wastewater at Madisonville’s treatment plant first hits the site’s influent lift station pumps, so they have to be tough.  Having seen over a period of 12 months that the first Landia pump was more than up to the task, the city went ahead with purchasing a second Landia chopper pump.

On a visit to the plant to check on the new duty pumps, Art Savage from Landia suggested they consider trying a Landia AeriGator to better attack the grease and scum problem in the lift station. Drums of degreaser seemed to have little impact on the significant problem. Allen Castillo and Jamar Randel were having to use a drum of anti-greasing chemical every two weeks (an annual cost of around $4,500) to reduce the build-up of FOG.

Having seen the sustained performance of the new Landia duty pumps, Madisonville agreed on Landia’s popular Trial-to-Buy program to see if the AeriGator would prevent the build-up of fats, oil and greases (FOG), as well as macerate rags. The AeriGator is based on the same proven chopper pump system, but is fitted with a venturi nozzle to aerate lift stations and wet wells.

Plants such as Madisonville can realize significant savings by taking advantage of the fact that Landia is able to retrofit their chopper pumps onto existing base elbows of existing clogging duty pumps – regardless of manufacturer.

Madisonville has also gone ahead with the purchase of a FOG/rod from Smith Pump Company after discussing its benefits with them and Landia.

A FOG/rod system approximately $1,000 – but it is worth it in the long run. It is, in effect, worthwhile insurance against a pump worth around $15,000. It is a small price to pay.  As many lift station operators will confirm, the build-up of rags and grease can create problems with basic, inexpensive float switches. Rag accumulation on a switch can prevent a pump from switching off, leading to overheating and then a very expensive burn out.

The FOG/rod is a failsafe lift station level sensor that is almost as simple as a float, but with far less maintenance.  Easy to clean (an alarm notifies the user when cleaning is required), the FOG/rod is pulled through the maintenance pad mounted nearby and supplied in the box with each new unit.

“Together with the chopper pumps, the installation of the Landia AeriGator has been very successful”, said Allen Castillo.

“The AeriGator also reduces particle size, so those greaseballs we used to see are a thing of the past. Our team takes great pride in making this plant as efficient as possible. We’re not missing the downtime of having to unblock the previous pumps! – and thanks to Landia, we can see a big difference in all of our tanks, with the lift station right through to final effluent looking so much better”. 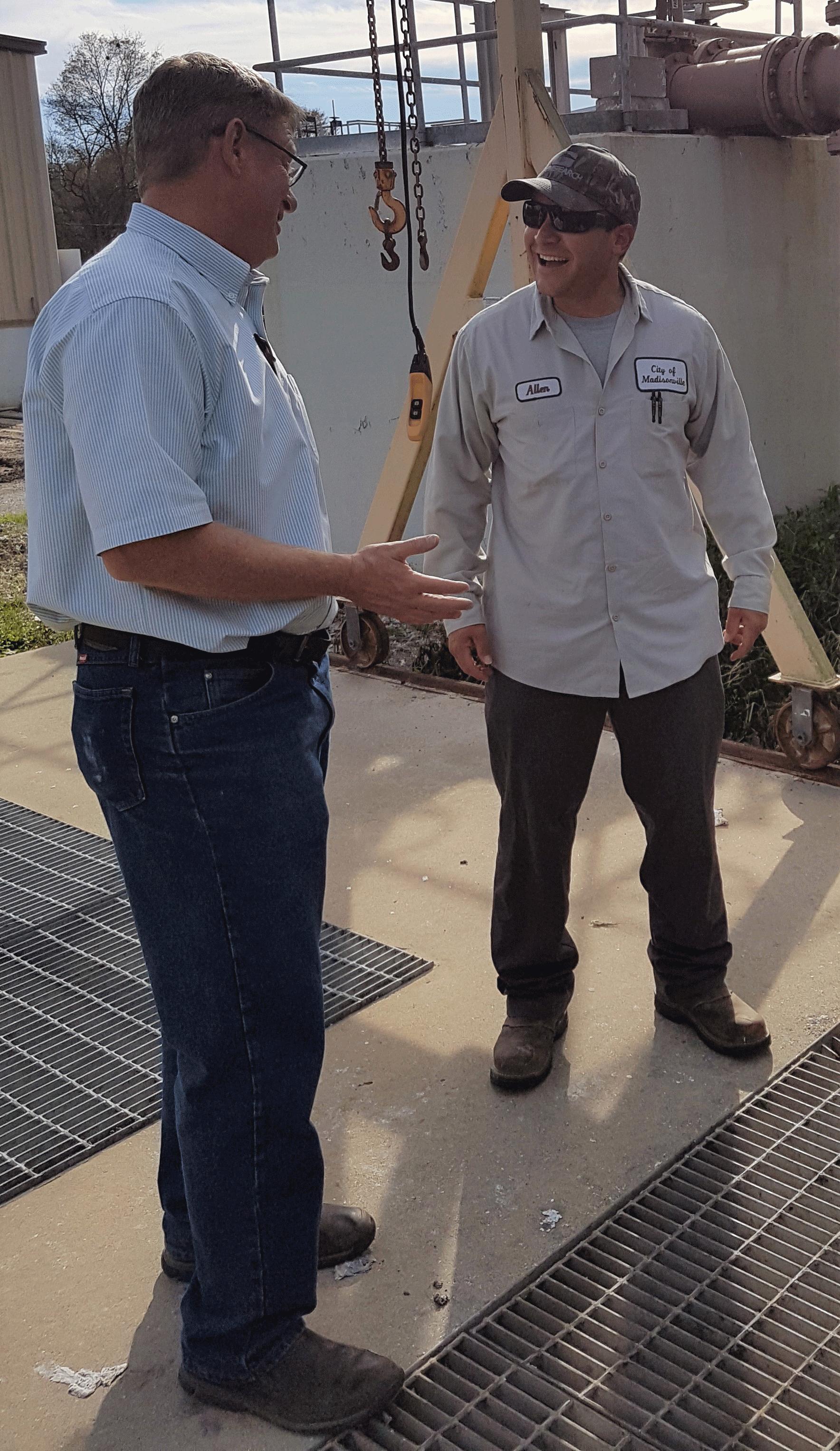